Hydroponics operations that grow cannabis are among the fastest growing segments of customers using this high grade fulvic acid extracted from a mineral deposit AgTonik owns in the Southeast United States, said Andrew Bruex, CEO of AgTonik. The company has an 11,000-square-foot production facility in Kalamazoo and a 2,000-square-foot R&D location in Portage.

“Customers for this product include vegetable growers, poultry operations, a horse ranch, golf courses and a host of other businesses,” said Bruex, who launched AgTonik with the company’s Chief Science Officer and President Ralf Ostertag. “But the explosion of cannabis cultivation in the U.S. is like the old gold rush, and we are selling the pick axes and shovels.”

AgTonik has spent the past year putting into place a team of people, business processes and equipment to scale up its extraction of fulvic acid and formulate products that are sold worldwide.

In addition to Bruex and Ostertag, the company has assembled a staff of four people who have implemented quality assurance procedures based on current Good Manufacturing Practices (cGMP) for concentrated dry and liquid forms of fulvic acid, an enterprise resource planning system (ERP) for back office functions, and a website, http://www.agtonik.com. 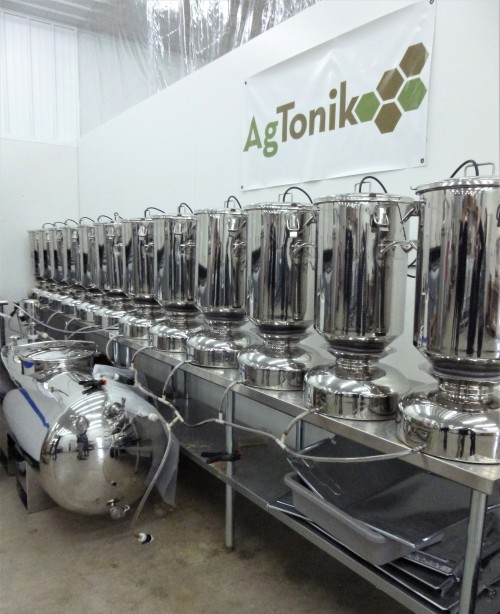 AgTonik extracts fulvic acid from shale-like clays and sells concentrated products to about 100 farms and companies in the United States, Canada, Europe, Asia and Australia. Fulvic acid promotes growth and yields of plants by acting as a carrier of nutrients through their root systems.

“You can find fulvic and humic acids in the common compost pile,” said Bruex, who holds a bachelor’s degree in business from Western Michigan University. “But the fulvic acid is in such trace concentrations that it would take mounds of compost to produce a 1-ounce bottle of our liquid concentrate. Nature has done that work for us by concentrating the fulvic acid in our particular geological formation over millions of years.”

Bruex said the company uses a proprietary process to extract fulvic acid from clays where microbes have broken down prehistoric plant matter into fulvic and humic acids, along with other constituents. AgTonik conditions the clays for up to two years, then extracts the fulvic minerals and organic acids with cold water and gravity filtration. “It’s Mother Nature doing the extraction – we don’t use elevated temperatures, pressures or chemicals in our proprietary process,” he said.

AgTonik has implemented a number of quality control procedures based on cGMP. Some of those include analytical testing by independent laboratories, written standard operating procedures, and robust lot control to provide high grade fulvic acid in exact concentrations to reduce waste.

For more information on AgTonik, fulvic acid and its agricultural applications, please refer to the company’s website: http://www.agtonik.com.